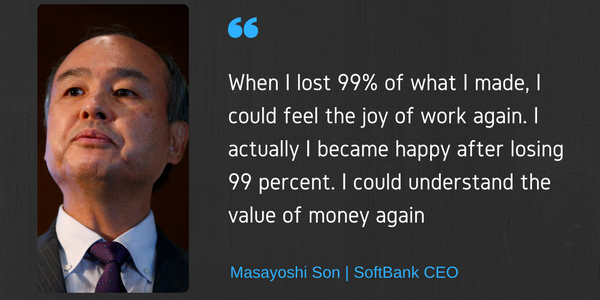 Masayoshi Son is the founder of Softbank and the richest man in Japan. He’s known to the world as:

When asked what he would want people to remember about him after he leaves the earth: “A crazy guy who bets on the future.”

The following is the except from Son’s interview with HBR in 1992 when Softbank was 10 year old. This is how Masayoshi Son started Softbank:

“For a year and a half, I did research and made business plans. While I prepared, I had no income. I spent money, I had a new baby. My wife was worried. All my friends, my father, my mother, everybody was worried. They asked me, what are you going to do? You spent years studying in the United States, and now you aren’t doing anything. I spent all my time just thinking and thinking, studying what to do. I went to the library and bookstores. I bought books, I read all kinds of materials to prepare for what I would do for the next 50 years.

I came up with 40 new business ideas—everything from creating software to setting up hospital chains, since my wife’s father is a doctor and has a hospital. Then I had about 25 success measures that I used to decide which idea to pursue. One success measure was that I should fall in love with a particular business for the next 50 years at least. Very often, people get excited for the first few years, and then, after they see the reality, they get tired of the business. I wanted to choose one that I would feel more and more excited about as the years passed.

Another factor was that the business should be unique. That was very important to me. I didn’t want anyone else doing exactly the same thing. A third was that within 10 years I wanted to be number one in that particular business, at least in Japan. And I wanted to pick a business where the business category itself would be growing for the next 30 to 50 years. I didn’t want to choose a sinking ship.

I had all those measurements, about 25 in all, and 40 new ideas. I took a big sheet of paper, and I drew a matrix and put down scores and comments for each. Then I picked the best one, which turned out to be the personal computer software business. That was the start of Softbank.

I looked around for someone who was selling software, and I couldn’t find anyone. So, I thought, if no one is going to do it, I should do it. I made a list of the software producers and went to see them to find out what kind of software was available.

I had a very long-term vision. I didn’t have any evidence, but I believed in myself. I believed that someday I would have a very big company, a global business, and a very successful company.”

While in college, Masayoshi Son wanted to become financially independent as soon as possible. He started looking for jobs that only required 5 minutes working and would pay $10,000 a month. His friends thought he was crazy. There were illegal jobs such as selling drugs but Masayoshi Son did not want to do anything illegal.

Masayoshi Son learned from Konusoke Matsushita, the god of management, that inventions can generate money. He set out to do inventions. His goal was to have a new idea for inventions every day. He would set his clock to go off in 5 minutes and in these 5 minutes he would come up with one invention. He wrote all those ideas in a notebook. This notebook has 250 ideas logged.

Through this process, Masayoshi Son chose one idea and created a patent which later sold to Sharp for $1 million. This was when he was still at University of California Berkeley and 21 years old. When also in college, Masayoshi Son create video games and later sold for $2 million when he returned to Japan.

“Life is short. I will regret if I don’t act boldly when I am young.”

“Because time is limited. We must live life to the fullest.”

If you would like to have a conversation, open your email and send me an inquiry at coach@hoanmdo.com

Werner Erhard with his younger son, St. John
Werner took his son, St. John, to Hawaii. They went sailing. John was very frightened. He already knew that the boat is not likely to tip over, and both of them wore life jackets. In other words, they would be safe. However, reassurances and explanations are not always enough to quieten fear.
When they got way offshore, John started to talk incessantly. He kept on going: “Why don’t we turn around and go back?” “I think we’re out far enough. And besides that, I think that the mast is going to break, and the rope is falling down.” “I looked and there’s a cloud up there and it’s getting bigger and I’m shaking a lot, don’t you think?” “I think we ought to turn around now and go the other way.”
John was on automatic.
Werner said “son, if you are frightened, you don’t need to hide that. If you are afraid, it’s all right to let me know that you are afraid. You don’t need to go through that whole racket in order to hide the fact that you’re afraid.”
John acknowledged “Yeah, I’m afraid.”
John sat there and was able to experience fear. He was frightened. But he did stop talking. He no longer had to hide the fear with his talk. He could be quiet and he was.
When they were back to their hotel, Werner asked John: “How do you handle fear in life?” “How was he going to handle his being afraid in a sailboat?”
John had a very good idea about that. He said that he would just not go sailing anymore. The logic of this was overpowering. Werner remarked that what he can do is to avoid all the things that are uncomfortable in life as a way of getting around being uncomfortable. He can set a high value on being comfortable. That’s a sure solution and it’s a solution most people take. They get down in one little corner of the boat of life and play down in that corner, where it is nice and safe and where they are protected from all discomfort and all fear and all harm. And they are truly survivors.
They even look good, because they are always dealing with something as totally familiar to them, as something that they can handle.
Werner told John that it was possible to do that. The only problem with that is that he never gets to the true joy in life. Life gets more and more stuck. Eventually, he makes up really horrendous problems to have some variety in life. He might get deathly ill or have some tragic accident.
John thought that over for awhile. Werner asked if there’s another way to overcome his fear of sailing.
John came up with the idea that he could overcome his fear of sailing by being afraid of sailing. He got excited about going sailing and being frightened the next day. He actually looked forward to being frightened, because he already knew that he had discovered for himself that the way you overcome being afraid of sailing is by experiencing the fear. John chose to expand rather than to contract.
That’s the whole story about self-discipline. If you are afraid, the point is not to rub your nose in it, to inure yourself to it, to get used to it, or even to overcome it. The point is not to jam it down or suppress it. Rather the point is to choose to be uncomfortable in order to allow being uncomfortable to be. When you let something be, it lets you be. That way, you attain mastery.
What stands in the way of this is only your point of view. Your point of view is the point from which you view – which therefore you do not see. Your point of view is positional, and to get off it, to leave it behind, is always uncomfortable and frequently terrifying.

About the author: Hoan Do is a certified leadership coach with John Maxwell Team. Hoan have led multiple teams at Symantec Inc. across the globe delivering world-class solutions to protect consumers and businesses. Hoan is an expert in building highly performing teams. He believes that the best leader is the leader that could grow his followers to be leaders. Hoan has been organizing mastermind groups at work to share with other leaders about transformational leadership and coaching. He has trained many leaders both inside and outside Symantec via mastermind groups, workshops, and one-on-one coaching. Hoan perfected his own method “think and lead rich” to start leaders with the right mindset before equipping them with a complete leadership development solution.
Quotes from Werner Erhard to help you deal with fear and live life lovingly:

Reference: Werner Erhard The Transformation of a Man: The Founding of EST by William Warren Bartley III

Why am I reading this?
An interesting exercise which is similar to what Steve Chandler talked about:
Another practice:
Secrets of efficiency and effectiveness:
Application: identify few critical tasks that contribute most to income and schedule them with very short and clear deadlines.
An exercise: ask yourself constantly at least three times per day

Like/share/put + if this helps someone.

Still need help, send me an email at coach@hoanmdo.com

This story is about how Richard Howorth, the owner of Square Books, treated his customers. Jeff Bezos took this story to heart when he founded Amazon.

One day at Square Books, he was called on by his managers to handle a difficult customer. The young woman was angry because “a kid on the second floor had knocked some dirt down on her car,” Howorth recalled. “She was saying, ‘My husband is a lawyer.'”

He went outside, saw the dirt on her car and blew off the dust, he said. “It was nothing.”

But she remained unsatisfied, he said. “I asked her, ‘Can I wash your car for you?'”

She said yes, and Howorth drove with her and her friend to the local car wash — only to find it closed for repairs.

She became more irate.
“Can we just go to my house and wash it?” he asked.

She replied yes, and so at Howorth’s house, he washed, rinsed and buffed her car.

He asked her if that was good. She replied yes. She became downright pleasant.

She dropped him back off at Square Books.

The next morning, he said someone overheard the young woman talking “about the nice man who washed her car, confessing, ‘I wasn’t that nice.'”

Later that day, the young woman returned to the store, this time with all her friends, and they all bought books.

Are you doing the best you can for your customers?

HAPPY NEW YEAR TO YOU & YOUR FAMILY!

PS: If you want to explore how to make everyday count, contact me by sending me an email to hoandojmx@gmail.com