Be aware of the skills most employers are looking for regardless of the position you are seeking.
Those include:

If you are curious about the above method and how you can apply it to your life successfully, open your email and send me an inquiry at coach@hoanmdo.com

Why has experience helped some and not others?

How do we apply this lesson? I have a habit of writing down what happened to me since high school. Shihan Arakaki (founder and grandmaster of Musokai Karate) taught me to write down both what happened as well as what I learned. Now Dr. Maxwell taught me to write down my experience, my thoughts, my learning, and really spend time to reflect on it. The entire process takes less than 15 minutes daily but it has been a life-changing habit. It will be for you too.

For more details, please read Leadership Gold by Dr. John C. Maxwell or join one of my mastermind groups.

Zig is an engineer working for manager Tim. Zig is not a top performance but an above average one. For various reasons, Zig like other engineers in the company is getting paid below the market level.

Zig comes into Tim’s office one day: “Tim, I love working with you and the project. However, company X offers me a job with much higher pay. With my current situation, I must go for it.”

Tim is shocked as he has gotten Zig into a critical project and Zig really loves this new project. Zig is a loyal engineer who has been with the company for over 10 years. Tim quickly rationalizes in his mind that he can’t lose Zig. Even though matching Zig’s offer would make Zig the highest paying employee in his team, Tim sees no other way out.

After some exchanges to understand more about the situation and the offer, Tim: “What if we can match the offer?”

Zig gets a bump in compensation.

Unbeknown to Tim, the news about Zig spread across the organization like wild fire regardless of both Zig and Tim’s swear to keep the matter confidential.

Employees quickly learn that to get a raise, they can generate an offer from another company and threaten to quit.

While managers can save someone from leaving from matching the offer, it has a consequence that is difficult to deal with in the long run.

Like/share/put + if this helps someone.

Still need help, send me an email at coach@hoanmdo.com

Bill McDermott is the CEO of SAP, the world’s largest business software company. He worked at Xerox for 17 years climbing its corporate ladder from an entry-level salesman to the corporate officer and division president. Bill then went to become the president at Gartner. Bill joined SAP as its CEO for North America in 2002. He again climbed the SAP’s corporate ladder to become SAP’s CEO.

How Bill got the jobs he wanted is a valuable lesson. It demonstrates a key principle: if you really want it and are willing to ask for it, you will get it.

Bill went to the interview at Xerox’s office in New York. He wore a $99 suit (an expensive suit at that time) as he believed in overdressing and showing his professionalism.

Bill realized that his chance of getting into Xerox was very slim. He was competing against people who went to Yale, Princeton, Notre Dame,…

Instead of panicking, Bill connected with other interviewees to learn as much about them as he could. He asked about where they came from, what schools they went to, what they were at Xerox for…. In other words, he was interviewing his competitors.

Bill completed several rounds of interviews and was ushered into a senior sales executive’s office for the final interview.

Instead of being nervous, Bill remembered his mom’s words and took them to heart: Just be yourself.

When the interview with the executive completed and Bill was told that he would hear back from Xerox after they reviewed all interviews, Bill did not want to wait. He knew exactly what he wanted: a job at Xerox.

He told the executive: “I told my father as I left him at the train station today, that I guaranteed I would come home tonight with my employee badge in my pocket. In twenty-one years, I’ve never broken a promise to my dad, and I can’t start now.” He then looked the executive into the eyes with silence. He knew that all he could do was to ask for what he wanted.

Bill got the job on spot. He did not leave immediately but closed the offer: “I do want to confirm that you’re going to hire me at the Xerox Corporation and I’m going to work for this company, yes? You’ve given me the job, is that right?”

After securing the support from the man in charge of Xerox’s New York operation, Bill applied to become a sales manager.  Bill was the least experienced, youngest candidate.

Bill arrived at the interview dressing above his present grade. While in the waiting room, he interviewed his competition. He asked about why they wanted the job, what their plan would be if they got the job…. Once he’s done, he knew that he had an edge: he wanted the job more than anyone else and he was prepared more than anyone else in the room.

Bill then interviewed with an executive who had the hiring authority. He showed her his plan in writing and told her what he would do as a sales manager.

Then he closed the interview after the executive told him to wait for HR to communicate the final decision: “You know that I can sell. And I know that I can get everyone on the team to sell. Give me this chance, and I will make this team number one in the country. I guarantee it. Number one.”

“Well, Bill, that is very different from everyone else.” She was smiling. “I appreciate everything you’ve done today.”

“I respect you, and therefore I don’t want to ask you tedious questions. I only want to ask you one more: Will you give me your trust and give me a shot at doing this job?” Bill asked.

“My trust is in your hands, and I believe the right thing will happen. I’ll be in the office early tomorrow if you’d like to talk some more.” Bill concluded.

Bill got the job. Once again, Bill asked for what he wanted and got it. 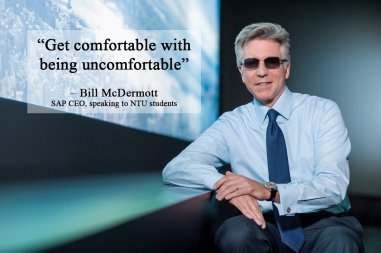 If you really want a job, ask for it. Go straight to the decision maker and ask for it with all your passion and energy. Be sure that it’s your dream job.

Learn another skill to ASK for what you want: “This simple skill is worth millions, helped many become millionaires, billionaires”

PS: if this article inspires you, don’t wait. Take action immediately. If you want to talk, contact me by sending me an email to hoandojmx@gmail.com . To get a response, be sure to tell me your dream. Two engineers (Tina and Steve) go to an interview. Both work for the same manager.

The hiring manager: “Tell me about your manager, especially what you don’t like about him.”

Steve: “Hmm, I don’t know what to tell you. He’s the reason I am looking for a new job. He’s a micromanager at his best. He tells people what to do and when people can’t satisfy him, he does everything to kick them out. He manipulates people by using his power as a manager. He’s very good at kissing up and kicking down. His boss loves him. None of my co-workers like him. They are all looking secretly. The only reason people stay with him is because they have not found another job yet. He draws blood out of us like a vampire and throws us away like trash when he no longer needs us.”

Tina: “I love my manager. Even though he’s not a role model for me, I learn very valuable lessons from him. I learn a great deal of what not to do as a great manager. These types of lessons are not easily available and my manager happens to be very good at teaching me that. So I am grateful for his existence in my life.”

Tina gets the job and Steve keeps looking.

Be positive. Be humble. Any situation no matter how bad or good it is can give you valuable lessons.

And in an interview or to be successful in your career, never speak ill of your boss.